South Dakota farmers produce about 800 million bushels of corn a year. Half of that is used to make ethanol and nearly one-fifth is fed to livestock.

But that leaves about 30 percent, or roughly 240 million bushels, that is transported out of the state, primarily to the Pacific Northwest where it will be shipped to foreign markets.

Ideally, we’d like to use more of that corn in our state. That’s the idea behind a feed mill study that was commissioned by South Dakota Corn and conducted by the ProExporter (PRX) Network.

That research firm reviewed statistics and performed a geographic information system analysis of corn use to determine locations where corn supplies likely would be sufficient to support a new feed mill. The study didn’t identify specific sites, but lays out general locations that have potential.

“There are a lot of bushels available in many parts of the corn production area,” said Marty Ruikka, a PRX principal. “There are also some places, though, where corn demand is very, very high.”

PRX produced a map showing the state’s ethanol and soybean processing plants, then color-coded the regions those plants serve. White spaces on that map represent regions that might be more opportune to build a feed mill.

“For feed mills or any utilization of corn and soybeans, the opportunity is huge in some of those white spots,” said Lisa Richardson, South Dakota Corn’s executive director. “The study tells us where there are some unique opportunities for the state.” 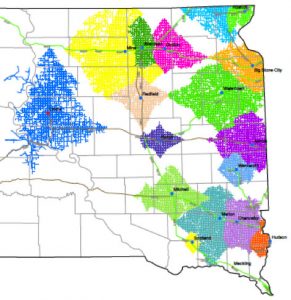 The study concluded that, “After accounting for all bushels used in industrial processing, there remains plenty of corn to support new feed mill operations.”

Ruikka said because grinding technology has improved, some companies are choosing to shut down old feed mills and open new ones. Feed mills range in size, with the largest having a capacity to use about 15 million bushels of corn per year.

Ryan Wagner, president of the South Dakota Corn Utilization Council, said information from the study could be offered to out-of-state companies that might want to build a feed mill in South Dakota. The state of South Dakota also could use this study in conjunction with its data regarding concentrated animal feeding operations as a recruiting tool. Data sets could take into account CAFO setback restrictions along with locations where corn is available and cheap.

“The main thing that came away from the study is there’s a lot of excess corn that could be used locally,” Wagner said. “We’d like to see some of those gaps filled in.”

Troy Knecht, president of the South Dakota Corn Growers Association, said he believes there is great potential for feed mills in the state.

“We export corn that we don’t grind. If we can keep it here and improve our basis, that’s a good deal,” Knecht said. “It also leads to more jobs and more animal units. So many livestock operations want to come to our state.”

Ruikka said a feed mill’s profitability is directly related to its corn cost. The closer a feed mill is to an ethanol plant, the more competitive the environment. That’s one reason the gaps on the PRX map could be prime locations for a feed mill.

South Dakota voters will elect a new governor and a new U.S. representative Nov. 6. To provide insight into the candidates’ positions and views on ...