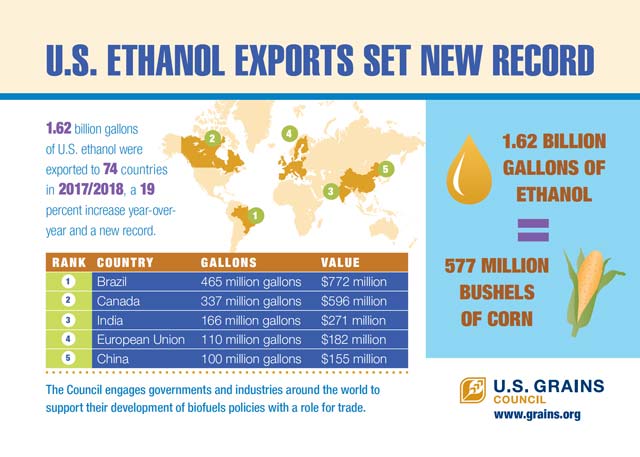 The United States exported a record 1.62 billion gallons of ethanol to 74 countries in the past marketing year and is pursuing opportunities to more than double that amount in the near future.

The U.S. Grains Council, which develops foreign markets, has set a goal of 4 billion exported gallons in 2022.

Our state’s corn checkoff dollars have played a role in establishing and expanding export markets. South Dakota Corn is among more than 160 commodity associations and agribusinesses that make up the Grains Council membership. Exports of U.S. grains and co-products also set a record this past market year.

Richardson and South Dakota Corn board members Ryan Wagner of Roslyn and Travis Strasser of Wilmot were among 240 participants at the Grains Council’s February meeting to set goals and strategize plans for the continued development of foreign markets for our nation’s corn, ethanol, distillers grains, sorghum and barley.

Global markets are vital to the success of U.S. agriculture, with 97 percent of the world’s population living outside of the U.S. Our country’s agricultural exports are valued at $137 billion and have been steadily growing.

The Grains Council is committed to increasing exports of all of those commodities, but believes the potential is particularly strong in the ethanol market. More than 70 countries have renewable-fuel programs, creating an abundance of opportunities. The world is looking for octane, and U.S. ethanol is a low-carbon solution that can compete globally.

To reach the 4-billion-gallon goal, the U.S. will have to overcome various challenges. Some governments oppose imports, some oppose biotechnology, some are influenced by oil companies that don’t want to blend ethanol. But the opportunities are there. Here’s a sampling of countries with high potential.

Mike Dwyer, who leads the Grains Council’s global ethanol efforts, said he expects 75 percent of U.S. exports to go to those six countries by 2022.

Other countries are smaller markets but have potential for growth. Indonesia is the 8th-largest liquid fuel market in the world and has an E2 mandate, which isn’t currently enforced because of the high cost of domestic production and a reluctance to import ethanol. Bolivia intends to move to E25 by 2025. Vietnam initiated E5 use in January 2018 and plans to expand to E10 by 2020. The Philippines, a consistent buyer of U.S. ethanol, has an E10 mandate and is considering expanding to E20 by 2020. Ireland is considering a move to E10.

Mission “makes a lot of sense”

Wagner, president of the South Dakota Corn Utilization Council, serves on the Grains Council’s board of directors and is a member of the Middle East/Africa Action Team. He said he’s been impressed with the Grains Council’s efforts in expanding ethanol exports and is confident the numbers will continue to grow steadily.

“The last couple of years, the Grains Council has had a new focus on ethanol and I think it makes a lot of sense,” he said. “Everyone across the world has a need for octane and U.S. ethanol is the cheapest source. A lot of countries, China and India particularly, have air pollution problems too, and we know the benefits of ethanol burning cleanly.”

Although India’s current policy is to import ethanol only for industrial use, there’s hope that it will eventually eliminate its ban on U.S. ethanol for vehicle fuel. The Grains Council supports domestic ethanol production in India and other nations, and believes that ethanol policy mandates could open up future markets as demand grows and U.S. ethanol is needed to supplement domestic production.

“We’ve seen some success with that kind of model,” he said. “Some countries don’t have the feedstock needed to clean up their air.”
As the economies and populations of many foreign countries grow, more people are driving, Wagner said. That raises the demand for fuel, including ethanol. Some of the countries that buy ethanol might surprise people. For instance, the United Arab Emirates is one of the most oil-rich countries in the world, yet was the ninth-biggest buyer of U.S. ethanol in the 2017-18 marketing year because of ethanol’s value as an octane source.

Strasser, who serves on the South Dakota Corn Growers Association and represents that organization as a delegate to the Grains Council, said he, too, has been impressed by the commitment to expand ethanol exports.

“One area that really stands out to me is the Japanese market,” he said. By May or June, Japan will begin importing U.S. ethanol as a feedstock for ethyl tert-butyl ether. Strasser credits the Grains Council for successfully opening the door to Japan. That country previously purchased only sugar-based ethanol, but updated its energy policy and became convinced of the value of U.S. ethanol.

Strasser noted that Japan currently has an E3 (3 percent) mandate with an E10 goal, and its new policy calls for U.S. ethanol to make up 55 percent of the market share. With a mandate of E3, Japan would buy more than 100 million gallons of U.S. ethanol. If it achieves its E10 goal, that amount could more than triple. The Grains Council hopes to eventually gain a 100 percent market share in that country.
“China is another market with a lot of potential,” Strasser said, pointing to that country’s plan to have an E10 mandate in place in 15 provinces by 2020. “That would make total ethanol demand about 4 billion gallons. It would be pretty difficult to meet that demand domestically.”

Strasser said he’s excited about the accomplishments the Grains Council has achieved and even more excited to see what it can do with an additional $7 million that will be made available through federal Market Access Program funds.

Spring has finally arrived. However, it’s likely to be a long wait before planting season begins. Many South Dakota farm fields were still covered with ...

SD Corn Growers Association Made an Impact in Pierre

The 2019 South Dakota Legislative Session has wrapped up, and we want to take a moment to reflect on the accomplishments. It’s been an interesting year. ...