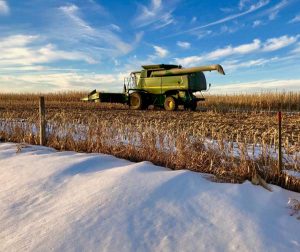 Spring has finally arrived. However, it’s likely to be a long wait before planting season begins.

Many South Dakota farm fields were still covered with snow as spring approached. Temperatures were below freezing during the last 25 days of February and into early March, which prevented melting. And the frost was deep. When the temperature did rise above freezing in much of the state the week of March 10, melting snow and rain caused runoff and widespread flooding. All of those things add up to a challenging start to the growing season throughout much of the state.

“It will be a late planting season, that’s for sure,” said Laura Edwards, South Dakota State University Extension state climatologist.

Edwards pointed out that the wet conditions are a carryover from last fall when rains and muddy soil delayed the harvest, particularly in the southeast part of the state. Water was still standing in many fields and ditches as winter arrived.

To make matters worse, the last six or seven weeks of winter were a bear, including one of the coldest and snowiest Februaries on record. February ranked as the sixth-snowiest all-time at Aberdeen, fifth-snowiest at Sioux Falls and fourth snowiest at Rapid City. And there was a lot of moisture in that snow. Edwards said the months of January and February historically each produce less than one inch of precipitation.

Heavy snow piled up on rooftops. In some places, rain added to the moisture content of that snow. There were numerous reports of collapsed roofs on machine sheds, hog sheds and other buildings.

In addition, a March 13-14 blizzard hammered parts of the state, particularly west of the Missouri River, where ranchers had to shovel by hand to free cattle from 8-foot snowdrifts. Livestock losses were heavy.

In addition, February was one of the coldest in recorded history, even ranking third-coldest at Aberdeen.

“The longer we stay cold, the more we squeeze the spring season,” Edwards said. “Then, when it does warm up, it warms up in a hurry and snow melts quickly.”

Even when the ground thaws, it was so saturated when it froze that soils are more impervious to soaking up much of the snowmelt, increasing the chances of spring flooding. The worst-case scenario would be rain on top of that.

The USDA’s National Agricultural Statistics Service reported that 96 percent of the topsoil and 86 percent of the subsoil in South Dakota has adequate or surplus moisture.

The National Weather Service reported that chances for minor, moderate or major flooding are above normal across the northern and eastern parts of the state. The flood threat, both in location and severity, will largely be determined by future rain or snow. Some regions have already dealt with flooding. Flooding remains a concern along several rivers.

All of those challenges will likely leave farmers scrambling to apply fertilizer and plant. This could be one of those years when some farmers have to count on prevented planting provisions in their crop insurance policies.

Looking further ahead, Edwards said there are no indications of consistent warm weather heading into summer. Cooler weather would mean a slower growing season.

Only time will tell what’s in store.

Two join SDCGA board of directors

The South Dakota Corn Growers Association has added two new members to its board of directors. Dave Ellens, 33, who farms near Wentworth, represents ...

The United States exported a record 1.62 billion gallons of ethanol to 74 countries in the past marketing year and is pursuing opportunities to more than ...