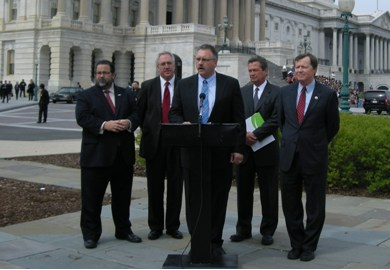 HR 4940, the “Renewable Fuels Reinvestment Act,” was introduced yesterday by Rep’s Earl Pomeroy (D-ND) and John Shimkus’ (R-IL) which would extend the Volumetric Ethanol Excise Tax, the Small Ethanol Producers Tax Credit and the Secondary Tariff on imported ethanol for an additional five years. The bill was co-sponsored by, Rep. Herseth-Sandlin (D-SD) among 28 others.

VEETC provides a 45 cent per gallon tax incentive for ethanol blenders, not farmers or ethanol plants is set to expire at the end of 2010. The incentive ensures ethanol blends in the marketplace and is passed on to the consumer in the form of lower prices at the pump.

A recent study warned that if the VEETC credit is allowed to expire it would cost 112,000 jobs and reduce domestic ethanol production by 38 percent. This loss of production would be made up for with imported fuels.

“The industry has a lot at stake,” said Brian Jennings, Vice-President of the American Coalition for Ethanol.

Extending the tax credit also plays and import role in the development of domestic cellulosic ethanol.

The expiring legislation would be a terrible blow to corn farmers and rural communities.

“As corn farmers get ready to plant this spring, the assurance of a strong and growing ethanol market is critically needed for the additional bushels of corn we produce every year on the same acres,” said Duffy. “And the economic boost the industry offers throughout South Dakota communities alone is unparalleled. It is critical that the ethanol industry has the incentive to expand production to meet the demands of consumers.”

Some people may complain about these incentives, but they work. In 2009, the tax revenue from ethanol production generated $8.4 billion back to the Federal Government earning them $3.4 Billion more than the cost of VEETC.

Twitter has been lit up all week with tweets about High Fructose Corn Syrup. A recent Princeton study released on Monday came with a headline saying HFCS ...