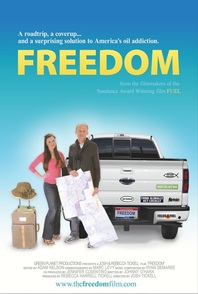 Finally, a film that dares to defend America’s only available alternative to gasoline, ethanol. The job producing and environmentally friendly fuel has plenty of critics these days, but this film takes a much closer look at the truth behind this ever growing and evolving industry.

The film does an excellent job of debunking three popular myths about ethanol including Food vs. Fuel, Land Use Change Theory and Ethanol’s Energy Balance. The film makers go to the root of the myths with interviews with folks like Tim Searchinger and from there continue by investigating their findings by expanding on it with up-to-date science based research from multiple sources dispelling each myth.

Some of the film takes place in South Dakota as the crew visited with South Dakota Corn Utilization Council director, David Gillen, a farmer from White Lake who shares his insight on the importance of ethanol to farmers and the country.

“When Americans understand the truth about what we’re doing out here and what ethanol does, it’s a win-win for everybody in the United States,” says Gillen.

The film also visits with South Dakota consumers at an ethanol blender pump station in Baltic, SD. Fuel consumers explain in the film why they are choosing ethanol as they fill up their vehicles. One particular customer, Neal Stratman, a young military veteran spoke of his support for ethanol because it’s less expensive and it’s a way to support local agriculture.

“It just makes more sense,” says Stratman. “We need to get away from being so dependent on foreign oil and support the local farmers.”

The film finishes with a look at the many possible future biofuel feed stocks like algae, corn stover, grasses, wood chips and even garbage. Showing viewers just how real these concepts really are.

So whether you are a supporter, user or a non-believer of ethanol, please take 50 minutes to watch this compelling documentary and see if your feelings change about the energy we use and the affects it’s having on the country we live in.

The FREEDOM film tour is coming to South Dakota.

You can view the FREEDOM movie trailer by clicking here: http://www.youtube.com/user/FreedomTheFilm

Late August and early September, or when the corn fields start turning from green to gold usually marks the start for corn silage season in South Dakota. ...

New jobs, tax revenues and additional grain marketing options are just a few of the many positives brought about by the improvements being made to the ...