Hearing in the Heartland 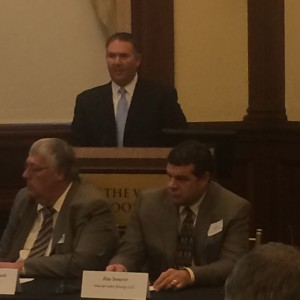 SDCGA president Mark Gross testifies at the Hearing in the Heartland.

You can read SDCGA President Mark Gross’s testimony below.

Good afternoon everyone. I would like to thank Iowa Governor Terry Branstad for holding today’s hearing and the Iowa delegation for hosting this ever-important event to discuss the future of America’s successful energy policy, the Renewable Fuel Standard.

My name is Mark Gross and I am a diversified family farmer from Bridgewater, South Dakota. I currently serve as the president of the South Dakota Corn Growers Association, a membership led, grass-roots organization representing the legislative interests of more than 1,500 South Dakota corn farmers.

To effectively demonstrate how important the renewable fuel standard is to South Dakota, let me tell you about a series of number ones.

Agriculture is far and away South Dakota’s number one industry with an annual economic impact of over $21 billion.

Corn is the number one commodity in South Dakota. In 2012, South Dakota’s corn crop produced $3.2 billion in cash receipts, a billion dollars above the state’s second leading commodity, beef cattle.

Ethanol is our state’s number one user of corn. Traditionally, South Dakota’s 15 ethanol plants have consumed more than 50% of the state’s crop each year. Approximately 372 million bushels will be made into one billion gallons of clean-burning ethanol fuel and 2.7 million metric tons of high-protein cattle feed this year alone.

The state’s ethanol industry has an annual economic impact of $3.8 billion and has created around 1,900 jobs in our state. Those jobs have an average salary of $60,000 and have revitalized rural communities and main street businesses across the state.

The RFS has spelled success for not just rural communities, but also our farm families. If you were to tour farms across South Dakota these past few years, you would’ve witnessed young people coming back, something that was not taking place in the 80’s and 90’s when corn was regularly being sold below the cost of production. Those types of market conditions are not sustainable, neither was the increasing average age of the American farmer.

The RFS has also been a blessing for all taxpayers, creating lower gasoline prices and cleaner air while reducing the country’s dependence on foreign oil.

An Iowa State study from 2011 revealed that having ethanol present in the marketplace lowered retail gas prices by $1.09 per gallon on average across the United States.

New research from the Argonne National shows that corn ethanol reduces greenhouse gases by 34% when compared to conventional gasoline.

Before the RFS was implemented, the United States imported 60% of its oil, now that number is closer to 40%. It’s no coincidence, American-made renewable fuels have helped to reduce that number, enhancing the country’s energy security.

The success of the RFS didn’t just happen overnight. For the past decade and a half, South Dakota farmers and others have invested their hard-earned dollars into biofuel refineries, creating another market for their corn.

In order to meet the growing demands of the Renewable Fuel Standard, South Dakota farmers successfully raised the largest corn crop in state history of more than 808 million bushels. Reducing the RFS following a record harvest literally pulls the rug out from underneath our farmers. According to Iowa State’s Bruce Babcock, corn prices will fall by 5% if the RVO is lowered, which would no doubt have a devastating effect as farmers face already tight margins. Ethanol plants will be placed under pressure, job loss will occur and economic hardship would be felt across rural America.

Please keep in mind that the RFS was not put into place to be convenient for oil companies. Ethanol’s blend wall is a fictional narrative created by the oil companies themselves, and acting on your proposal to reduce the RVO based on a decline in the demand for gasoline would show who your agency truly represents.

The Renewable Fuel Standard is working and has been triumphant on so many levels, including our farms, rural economies, gas prices, energy security and even the air we breathe. On behalf of South Dakota’s corn farmers, I ask that you please reconsider your proposal to reduce the Renewable Fuel Standard levels, retaining the volumetric requirements, which were set by law. Thank you.

The deadline to comment on the EPA’s proposal is nearly here (January 28th). The time is now to take a stand for rural America, lower gas prices, clean air and homegrown fuel. Show your support by submitting official comments to the EPA saying: “Don’t Mess with the RFS!” 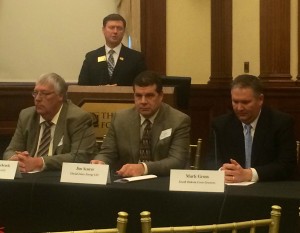 SD Sec of Ag Lucas Lentsch testifies at the Hearing in the Heartland.

Water Management Workshop to be held in Sioux Falls

Next week on Wednesday and Thursday (January 29th and 30th) in Sioux Falls at the Regional Extension Center (Link for directions), SDSU Extension along ...