House Bill 1192 Would Add More Blender Pumps to the State 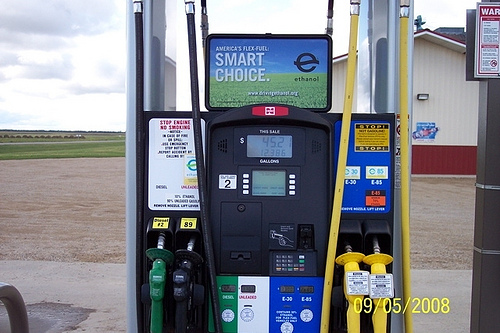 South Dakota has always been a leader in renewable fuels and current state legislation looks to make sure that the progress continues.

House Bill 1192 would create a grant program using $1 million in federal stimulus money through the American Recovery and Reinvestment Act of 2009 and would be used for the installation of additional ethanol blender pumps in South Dakota.

The grants would be issued between April 1 and May 28 of 2010 exceeding no more than $10,000. Gas stations are allowed to receive more than one grant if they choose to install multiple blender pumps.

The prime sponsor of the bill, Representative Mitch Fargen of District 8, received bipartisan support as the bill passed the House State Affairs Committee unanimously 13-0 on Thursday, Feb. 18. The bill now moves into the Senate for consideration.

The bill is modeled after past blender pump infrastructure programs developed by the South Dakota Corn Utilization Council which has been successful in establishing over 40 blender pumps across the state.

Ron Lamberty of the American Coalition for Ethanol states, “The blender pump has become a reasonable solution to the challenge of increasing the availability of E85 and ethanol blends beyond E10. In addition to the fact that blender pumps give the marketer the ability to offer those higher blends without replacing underground storage tanks and fuel lines – a huge cost savings – the pumps are used by every customer that comes to a station, which means all purchases help with the payback of the pump, making payback of the non-flex fuel portion much faster.”

Ethanol blender pumps are nothing new to South Dakota. In fact, South Dakota was the first state to install the pumps thanks to the South Dakota Corn Utilization Council. SDCUC continues to be a leader in the ethanol industry by adding additional infrastructure and looks to continue its progress with the current legislation.

Owen Jones, a farmer and rancher from Britton, SD writes, “With the incentives outlined in HB 1192, the State of South Dakota can play a significant role in getting the proper distribution system in place for the future of renewable fuels. Instead of dispensing one product, five different products can be dispensed from one pump. Another reason I am very supportive of this Bill is the fact that this legislation is not only good for the ethanol industry, but it is good for our nation. We need to rid ourselves of the addiction on foreign oil and change to a renewable fuel system which our nation controls.”

Precision Agriculture and Beyond

Increased yields, savings in time, reduced runoff, precise application of nutrients and seeds are all ingredients of precision agriculture, which is ...

Monsanto and Pioneer seed companies are both currently involved in helping African farmers by planting new varieties of corn that intend on increasing ...