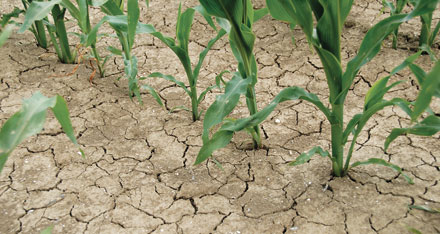 Monsanto and Pioneer seed companies are both currently involved in helping African farmers by planting new varieties of corn that intend on increasing yields in some of the harshest of climates. The Bill and Melinda Gates Foundation is providing funding for both projects. The goal of the foundation is to help fight hunger by providing small farmers with the tools and opportunities needed to boost their productivity, incomes and to build better lives for their families.

While some people look at the actions as just good public relations, fact of the matter is that populations are growing at such a rate that food production will need to be doubled by 2050.

“If you look at the issues the world faces, we’ve got a tremendous need for increasing productivity,” said Paul Schickler, President of Pioneer.

Corn is vital throughout eastern and southern Africa, but yields are typically only a fraction of what they are in the United States because of poor soil, lack of moisture and little access to herbicides and pesticides.

“My dream is that we launch drought tolerance in central Iowa on the same day we launch in Nairobi,” Grant said. “It’s the democratization of technology.”

Monsanto is currently testing their current drought tolerant varieties in South Africa, the only sub-Saharan country in Africa that allows biotech crops. The seed company hopes to expand to Kenya and Uganda this year. Monsanto hopes to have this variety available to small-scale farmers in Africa by 2016, and to United States farmers in 2012.

Pioneer’s nitrogen efficiency trait corn is still in its early stages and currently has no timeline for commercial release.

The improvement of nitrogen efficiency would allow farmers to raise corn on lower quality land and to use less fertilizer which also means less runoff. A majority of African farmers currently use little to no fertilizer due to its cost.

Through American Agriculture and Philanthropy, progress against hunger and poverty during this lifetime is possible.

“Poor farmers are not a problem to be solved; they are the best answer for a world that is fighting hunger and poverty, and trying to feed a growing population.” – Bill Gates

House Bill 1192 Would Add More Blender Pumps to the State

South Dakota has always been a leader in renewable fuels and current state legislation looks to make sure that the progress continues. House Bill 1192 ...

In a world growing by 200,000 people per day, farmers have plenty of mouths to feed. Biotechnology is allowing farmers to provide by producing more with ...