Looking into Ethanol’s Water Use 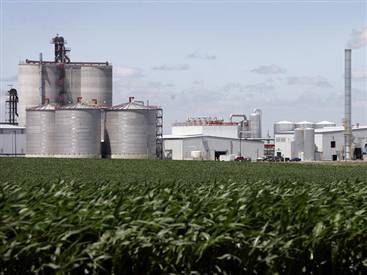 In discussing the Pro’s and Con’s of ethanol, a hot topic is always how much water it takes to produce a gallon. It might sound alarming at the time, but it never hurts to look further into the matter.

Ever increasing improvements in technology have allowed ethanol plants to use less than 4 gallons of water/gallon of ethanol today, down from 10 gallons a couple of decade ago.

Below are a few examples of water usage that should put things in perspective:

The amount of water needed to produce a gallon of conventional oil can be anywhere between 3-5 gallons of water on average. Oil produced from tar sands, like in Canada (where the United States gets a majority of its oil), uses eight gallons of water per gallon of oil doubling that of corn ethanol.

In most cases, an ethanol plant’s process water is not discharged from the facility, but recycled and reused by the boilers. Water that does leave the plant is treated and reused elsewhere or may leave the plant as part of the byproduct called distillers wet grain, a high protein livestock feed.

Biotechnology is also improving our future water use in the development of drought tolerant corn, which would cut down on the amount of irrigated acres. Although the National Renewable Energy Laboratory estimates that 96 percent of all the corn used in ethanol production already comes from non-irrigated acres.

This increase in ethanol efficiency is providing a cost-effective, home-grown, renewable fuel giving consumers freedom of choice at the pump to both better our environment and economy.

It’s getting down to the wire for making a decision on crop insurance with the March 15 deadline less than a week away.  With commodity prices down and ...

Darrin Ihnen was born and raised on a family farm in rural Hurley, South Dakota. Agriculture is just something that has always been important in Darrin’s ...