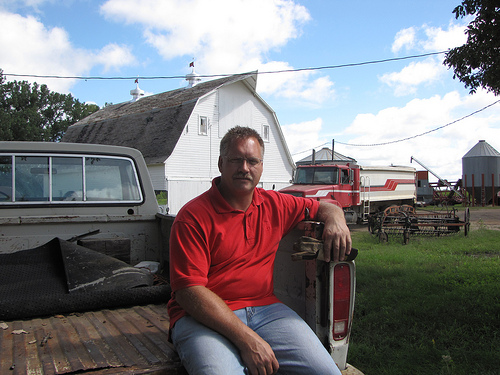 Darrin Ihnen was born and raised on a family farm in rural Hurley, South Dakota. Agriculture is just something that has always been important in Darrin’s life.

“Darrin showed interest in farming when he was in FFA in school. He had livestock out here He had hogs and did some farrowing and he did other projects and was quite active in FFA, so that’s when I knew he wanted to be a farmer,” said Roger Ihnen, Darrin’s father.

Today, Darrin farms corn, soybeans and wheat with his father. They also have a hog finishing and a cow/calf operation. Darrin attended South Dakota State University, studying Ag Business, and he and his wife, Becky, have four children: Kelsey, Kayla, Kilee and Jacob.

Darrin’s leadership in agriculture includes being active on the South Dakota Corn Council board. Ihnen is a past president of the SDCGA and also served as Vice-President of the NCGA before his current role as President. He is also a board member of POET Biorefining in Chancellor, S.D. Ihnen played a key role in the birth and growth of the locally owned ethanol plant.

“Darrin actually brought the producers over and they started their own group making possible the 100 million gallon, farmer-owned ethanol plant,” said Lisa Richardson, Executive Director of SDCGA. “I have watched Darrin develop into a leader who people follow…he’s a gentle giant in our industry,”

Darrin’s leadership in agriculture has been widely noted on the local, state and national level.

The National Corn Growers Association is the largest trade group representing corn growers in the United States. The group has more than 35,000 national members while representing 300,000 corn farmers who are members of state organizations. NCGA and its 48 affiliated state associations and check off organizations work together to create and increase opportunities for their members and their industry.

NCGA CEO, Rick Tollman, said, “We’ve had a long history of outstanding leaders in the National Corn Growers. I am impressed again that the right person seems to come to the forefront at the right time. And Darrin is among the best of those.”

Looking into Ethanol’s Water Use

In discussing the Pro’s and Con’s of ethanol, a hot topic is always how much water it takes to produce a gallon. It might sound alarming at the time, but ...

Negative reports about atrazine, the most common pesticide application in United States, maybe seem redundant, but yet another was released this week. Dr. ...