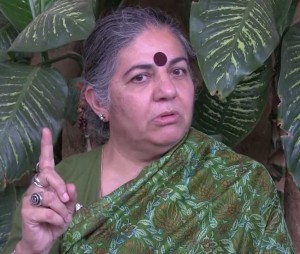 Vandana Shiva, an anti-GMO activist from India known around the world will be speaking at South Dakota State University at the Performing Arts Center in Brookings on Tuesday, March 24th at 7pm as a part of the Great Plains Writers Conference. Her lecture will argue against the notion that “industrial” agriculture feeds the world and that biodiversity agriculture produces more nutrition per acre.

Shiva has spoken against GMOs over a thousand times around the world as millions in her home country continue to starve every day. While it has been proven that biotechnology is safe and allows farmers to grow more while using fewer inputs and chemicals with less impact on the environment, Shiva continues on a crusade against the science at around $40,000 per speech.

The Green Revolution, which pushed for the hybridization of seeds and more efficient farming practices, has been credited with saving over one billion lives by the United Nations. Still, Shiva claims it to be a sham and a failure.

While a majority of agriculturalists agree that we need diverse mix of farming practices like conventional, organic, etc, Shiva continues to push for an organic-only world only with no exceptions.

The following is an exert about Shiva which sums her up perfectly from the article, “Anti-GMO activist Vandana Shiva has long history of rejecting science,” written by Anand Ranganathan 7/29/14

“The problem comes when Shiva claims Organic Farming and GM Foods cannot co-exist, that her solutions for sustainability are the only solutions. This is clearly not the case. Had the world depended entirely on Organic Farming for its needs it would have required an additional three billion hectares of land, especially as Organic Farming provides up to 34 percent lower yields than conventional farming.”

“Shiva’s mind is made up. A science-hater-turned-philosopher-turned-activist-turned-quantum physicist is busy sowing seeds of doubt among the gullible. Fools who challenge her will only end up supplementing those seeds with the nourishment they need, for they have now taken root and shall one day, just like their progenitor, bloom into magnificent trees laden with lies and deceit, ripe and pluckable. As the Navajo saying goes, you can’t wake a person who is pretending to be asleep.”

Shiva might want to look in the mirror the next time she calls modern food production a “sham.”