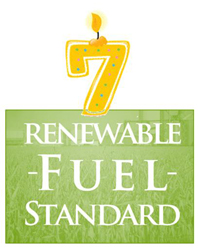 It was 2007 when Congress passed a bold and monumental law that put the country on a long-term path of using more American-made, money-saving, renewable transportation biofuels in place of costly, environmentally-damaging, imported oil from nations that despise our freedoms and values.

And since President Bush signed the Renewable Fuel Standard seven years ago today (December 19, 2007), America has made significant progress towards true energy dependence which has provided a boost to the overall economy through the creation of thousands of good-paying jobs, consumer savings at the gas pump, increased tax revenues and the addition of value-added agricultural opportunities which have revived rural communities across the Midwest.

As of today, America’s ethanol industry is firing on all cylinders and set a production record in 2014 as plants are producing nearly a million barrels each day. In 2013, domestically made ethanol displaced the need for 476 million barrels of imported oil.

In South Dakota, nearly everyone has a neighbor, relative or friend who works at one of the state’s 15 ethanol plants. The state’s renewable fuel industry directly employs 1,900 with an average salary of $60,000. Indirectly, the ethanol industry employs 7,600 as its $3.8 billion annual impact stretches far and wide from its high-octane fuel to its livestock feed co-product, distillers grain, and more. Currently, most of the state’s consumers can save around $.30/gallon by simply choosing E10 over regular gasoline.

Notable RFS stats since its passage in 2007:

The RFS will continue to make a positive and lasting impact on our country’s economy, environment and energy security as long as Congress and the EPA allow this successful homegrown energy policy to play out as designed.

China’s approval to allow the import of Syngenta’s corn hybrid, Agrisure Viptera (MIR-162), is a significant step for American farmers and foreign trade, ...

Our followers have spoken and the results are in for the #SDharvest14 photo contest. 1st Place ($200 ethanol bucks): Dana Kroupa via Instagram 2nd Place ...