The rise of DDGs 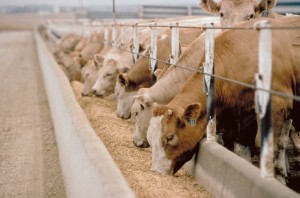 Distillers dried grains, “work wonders” according to livestock feeders and its popularity, production efficiency and known feed value are all continuing to grow. Simply put, the byproduct of corn ethanol has suddenly become a highly demanded co-product.

A report just last week showed that DDGs has replaced soybean meal as the number two livestock feed in the United States, second only to its former self, corn. The popular ration now claims a 17.5% share of America’s feed market.

Livestock feeders are continuing to efficiently substitute more DDGs into their animal rations in exchange of less corn and soybean meal. According to the U.S. Department of Agriculture, one ton of distillers grain can replace 1.22 tons of corn and soybean meal. This can be attributed to the feed’s higher energy and protein content.

In different terms, Economist Robert Wisner calculates that DDGs displaced well over one billion bushels of corn and 6.2 million tons of soybean meal in 2011.

An estimated 42.29 million tons of DDGs will be produced in 2012, up from 39 million tons in 2011. Experts claim that potential consumption of DDGs is somewhere around 60 million metric tons which will make for an interesting future in a growing world where the demand for protein has never been greater.

Head of RMA, ag specialists will speak at annual meeting

The administrator of the federal Risk Management Agency will discuss crop insurance and other farm programs Saturday, Jan. 7 during the 26th annual ...