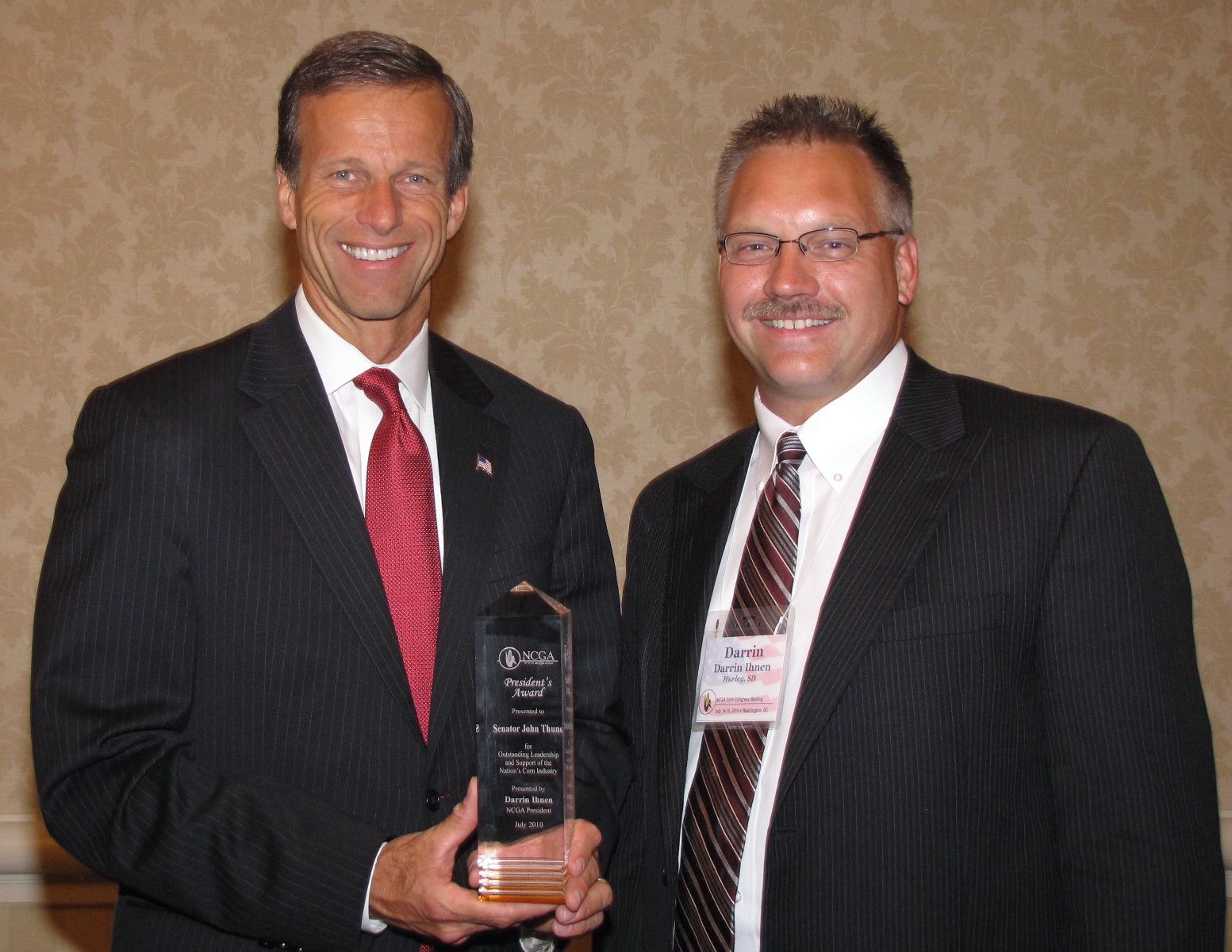 National Corn Growers Association President and Hurley, SD farmer, Darrin Ihnen, presented the President's Award to South Dakota Senator, John Thune, Wednesday morning during NCGA's Corn Congress events in Washington, D.C. The award is given annually to a representative from congress who has worked to advance issues important to corn farmers and agriculture.

"I have had the privilege of knowing and working with Senator Thune since his first term in the House of Representatives," NCGA President Darrin Ihnen said. "When it came time to decide who this year's recipient of the NCGA President's award would be, I immediately thought of Senator Thune. One of the things I admire most about him is that he is a straight shooter, whether in the halls of Congress or hunting pheasants. We appreciate his openness and accessibility, which makes working in tandem on important issues very easy."

"I am honored to receive this award from the National Corn Growers Association," said Senator Thune. "I appreciate the work this organization does to represent the interests of corn growers across the country, and specifically the working relationship I have had over the years with the South Dakota Corn Growers. I look forward to continuing to work together on the Renewable Fuels Standard, supporting the move to E15, and other initiatives important to corn producers."

Thune has always shown strong support behind his states' number one industry, agriculture.

"Senator Thune has always been a joy to work with, his support and accomplishments for the corn and ethanol industries in our state and nation are highly commendable making him very deserving of this recognition," said South Dakota Corn Growers Association Executive, Lisa Richardson.

"Senator Thune has been an advocate for agriculture throughout his public career including work on such important items as the Renewable Fuel Standard and the 2008 Farm Bill," Ihnen said. "We are honored to call Senator Thune a friend of corn and look forward to continuing work with him and his staff."

With plenty of discussion over VEETC (the ethanol blenders credit) in Washington DC and rest of the nation, Iowa State University released a study showing ...

Chase Elected to National Corn Board

Corn Congress 2010 is currently underway as farmers from across the country meet in Washington D.C. to discuss policy and elect next year’s National ...