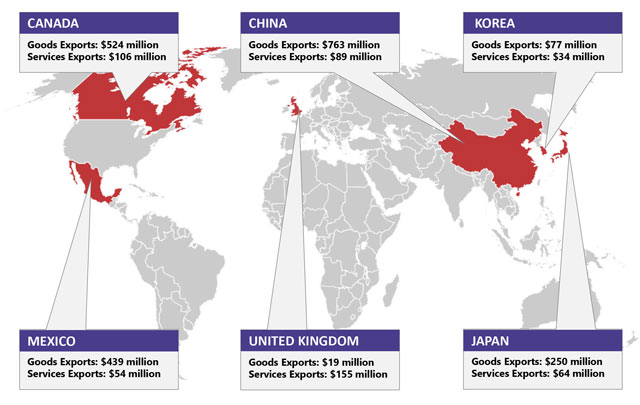 Figures included in a new report show just how important international markets are to our state’s economy. South Dakota exported a whopping $2.9 billion worth of goods in 2017, according to that report from Business Roundtable.

Travis Strasser of Wilmot, who represents the South Dakota Corn Growers Association (SDCGA) as a U.S. Grains Council delegate, said agricultural exports are vital because we produce more corn, soybeans, ethanol and other products than we consume. Free trade agreements have boosted exports of both U.S. and South Dakota goods.

“Since NAFTA was enacted, U.S. exports tripled to Canada and quadrupled to Mexico. And Mexico is our No. 1 corn market,” Strasser said. “Obviously, we need to maintain those relationships and work to further increase the value of exports to those nations. We don’t want to do anything to jeopardize those markets to us as corn farmers.”

Strasser said ongoing trade discussions are encouraging, and he hopes those talks can be expedited to make inroads in trade opportunities.

“That has to be one of our top priorities,” he said. “As we look at a potential shortfall in production this year, as painful as that is to us producers, this is definitely a time we need to capitalize on trade opportunities and increase our commodity prices.”

Business Roundtable, an association of CEOs of leading U.S. companies, said in its report that free trade agreements have helped fuel the growth of exports from South Dakota. In 2017, the most-recent year that statistics have been compiled, 43 percent of the state’s exports went to free-trade partners.

The report cites examples of specific gains and benefits in South Dakota.

Exports of South Dakota corn alone are valued at nearly $500 million, the U.S. Grains Council says. Ethanol exports are worth another $140 million and have the potential to grow steadily. Ethanol has been the fastest-growing U.S. agricultural exports over the past decade, and South Dakota is the sixth-largest ethanol-producing state. The value of exported South Dakota dried distillers grains, $162 million last year, actually topped the value of exported ethanol.

In 2018, U.S. ethanol exports totaled more than 1.72 billion gallons–the equivalent of 609 million bushels in corn – and the Grains Council has a target of 4 billion by 2022.

Meat exports are also extremely important to the nation and to South Dakota, too. The U.S. Meat Export Federation (USMEF) reports that 13 percent of U.S. beef and 27 percent of U.S. pork are exported. South Dakota is the eighth-largest beef-producing state and ranks 11th in pork production.

Steve Masat, SDCGA’s delegate to the USMEF, said overseas markets are crucial to the industry.

“All of those exports add to our bottom line. Meat being exported adds 39 cents in value to a bushel of corn,” Masat said. “The importance of exports is very substantial. It’s huge.”

The USMEF reports that without red meat exports, South Dakota corn farmers would have lost $288 million in corn revenue in 2018. That organization estimates the value of red meat exports to South Dakota was equivalent to $82 million in corn production and $20 million in production of dried distillers grains. On a national level, the U.S. shattered the record by exporting 1.35 million metric tons of beef last year. Pork exports, at 2.44 million metric tons, came up just short of the record.

Tariffs have been costly to the U.S. meat industry. Tariffs on U.S. pork exports to Mexico, the largest pork buyer, resulted in $835 million in losses, or $6.65 per head, according to the USMEF. Other losses included $1.14 billion, or $9.08 per head, because of tariffs on pork and variety meats to China; $600 million, or $4.55 per head, as a results of pork tariffs in Japan. Losses in beef exports were estimated at $550 million to Japan, $430 million to China and $200 million to the European Union.

A side benefit to exports is that animal products that aren’t popular in the United States–liver, tongue and hides, for example–are in high demand in other nations, Masat noted. While pork loin may sell for $1.69 a pound locally, pig rectums sell for $2.60 a pound in some countries.

Customers in 149 countries and territories buy South Dakota goods and services. The top export markets for goods are China, Canada and Mexico.

The Business Roundtable report shows that the international trade market also supports nearly 128,000 jobs in South Dakota, primarily in the fields of distribution, agriculture and science and tech services. Foreign-owned companies employ about 12,000 workers in South Dakota. Nearly one-fifth of those are employed by Canada-owned companies, including Hubbard Feeds, Saputo Cheese and the Dakota, Minnesota & Eastern Railroad.

By Steve Johnson, Iowa State University Extension Farmers who are dealing with delayed and prevented planting decisions need to keep good records and ...

This summer, South Dakota drivers are able to do something they’ve never done this time of year–fill their vehicles with E15. When the Trump ...