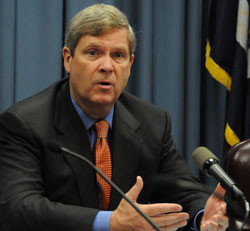 The United States Department of Agriculture’s Secretary, Tom Vilsack, has been very vocal lately stressing the importance of domestic biofuels and its role in rural development. Ethanol has been an economic bright spot throughout the country by bringing jobs and tax revenues to rural areas, even through the recession.

“Domestic production of renewable energy, including biofuels, is a national imperative,” Vilsack said. “That’s why USDA is working to assist in developing a biofuels industry in every corner of the nation.”

That development includes expanding ethanol’s infrastructure, which has always been key in expanding ethanol usage. The USDA will help install 10,000 blending pumps at convenience stores and filling stations around the country.

Expanded biofuels opportunities could make possible up to $95 billion worth of private investment nationwide that could create 900,000 quality jobs in rural areas.

“There are a lot of challenges in rural America and it doesn’t get as much attention as the rest of America, and oftentimes people just don’t think about rural America and they don’t understand the stress that is out there,” he said.

Vilsack goes on to say repopulating rural America is important because they are places where people understand the value of giving back. For example, farmers grow crops on the land but also practice conservation efforts to ensure that the land remains productive. These rural values helped build our nation and are part of what makes our country great today.

U.S. Representative, Stephanie Herseth Sandlin, will be hosting the U.S. Secretary of Agriculture, Tom Vilsack in Sioux Falls on Saturday, October 30 for ...

The ethanol negatives have lies, scare tactics and flawed science, but the ethanol industry has something more powerful, sound science. Indirect land use ...