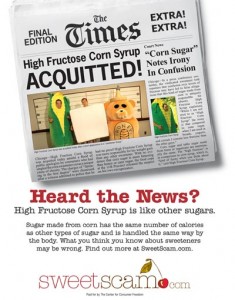 The Center for Consumer Freedom group is at it again, but this time defending the very popular, but wrongly accused ingredient, High Fructose Corn Syrup. CCF’s website, SweetScam.com is serving as a watchdog for the numerous attacks on HFCS by providing statistical information using sound science and professional expertise.

SweetScam. com is broken down in to four areas including:

The website reads, “Activists and others like to play the blame game when it comes to obesity. But their theory about some sweeteners doesn’t hold water. It turns out sugar is sugar, whether it comes from sugar cane, sugar beets, or corn, and it’s perfectly fine in moderation.”

A strong voice is needed as companies are centering advertising campaigns on the removal of an ingredient that is not actually improving the health of their product, but simply a marketing tactic. Most notably Starbucks has completely removed it from their menu and Pepsi-Cola is experimenting as well.

Consumer Reports wrote, “But tossing high-fructose corn syrup off ingredient lists may well have more to do with marketing than science. A sweetener made from cornstarch processed with enzymes and acids, HFCS has roughly the same composition as cane sugar—about half glucose and half fructose—and the same number of calories. Concerns that it’s directly responsible for rising obesity rates or somehow intrinsically more fat-inducing than sugar are largely unfounded…”

These marketing messages aren’t necessarily making claims against HFCS, but still put negative ideas into the average consumers’ mind. SweetScam. com looks to dispel the false rumors, claims and myths against the widely used sweetener by informing folks with the factual information that they deserve.

Mark Twain once wrote that “the trouble with the world is not that people know too little, but that they know so many things that aren’t so.”

Negative reports about atrazine, the most common pesticide application in United States, maybe seem redundant, but yet another was released this week. Dr. ...

Taking On HSUS and their Anti-Ag Agenda

Monday in the New York Times you will find a full page ad exploiting the negatives of the Humane Society of the United States paid for by the Center for ...