Blend Your Own Ethanol Pumps Available In Sioux Falls 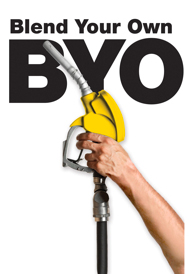 Multiple efforts were made in order to make these new pumps available. Investments by Kings Mart, South Dakota Corn Utilization Council, American Coalition for Ethanol and the Blend Your Own Ethanol Campaign helped contribute to the project.

Each blender pump installed in South Dakota is a huge accomplishment. More ethanol being consumed means more money being put right back into the local economy.

With South Dakota farmers producing another record corn crop in 2009, the resources are available to provide both feed and a source of home-grown, clean-burning, renewable fuel.

“Corn farmers take great pride in helping to produce over a billion gallons of ethanol in our great state, and installing infrastructure like this moves our industry in the right direction,” said David Fremark, President of the South Dakota Corn Utilization Council.

Sioux Falls is now among 40 other locations across South Dakota and more than 150 nationwide that offer higher blends of ethanol. The very first blender pumps in the nation were installed at the 4-Seasons Co-op in Brittion, SD and the Sioux Valley Co-op in Watertown, SD.

“We believe that when consumers are finally given these meaningful choices they will select the ethanol-blended fuels that work best in their vehicles,” said Brian Jennings, Executive Vice President for ACE.

Another Advancement in Agriculture: LoadOut Technology

Imagine pulling up to your grain bin full of corn with either your semi-trailer or gravity box and loading without having to even leave your seat. Not ...

Ag Equipment burning what it harvests? Yes it’s really happening as you read. A group of Nebraskans are currently developing, CleanFlex Power System, an ...