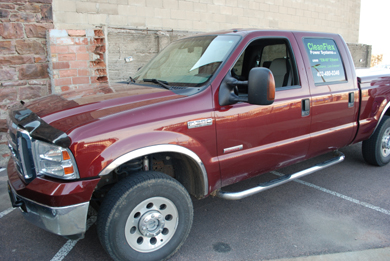 Ag Equipment burning what it harvests? Yes it’s really happening as you read. A group of Nebraskans are currently developing, CleanFlex Power System, an innovation designed to efficiently use ethanol in diesel engines. The idea was developed about a year ago when, Bob Dickey, of Laurel, Nebraska bought a new John Deere 150 HP four-cylinder turbo diesel irrigation system engine which he retrofitted to use an ethanol and diesel blend. The group showcased their new technology with a retrofitted diesel pickup that uses an ethanol-diesel mixture at a press conference in Sioux Falls this last Fall.

The group has developed a new hydrated-ethanol fuel called EM60 (a mixture of 60% ethanol and 40% water) to combine with diesel fuel to power diesel engines. The goal is to decrease pollution and increase efficiency in all diesel fueled vehicles.

“Just like oil and water don’t mix, ethanol and diesel don’t mix,” Dickey said. So, they have two lines run into the diesel engine. “The only time the ethanol, water and diesel are together is at the point of combustion and it really works well. The engine runs cooler, it runs more efficient and the emissions are reduced.”

Another use of the concept could be in diesel –powered freight trains, which the group has been discussing with BNSF Railway. Discussions have also taken place with John Deere.

“The bottom line is that we can become less dependent on foreign oil,” Dickey says.

Highlights and Benefits of EM60 include:

The fuel and retrofit can be purchased now, and CleanFlex is already marketing it. They think the potential for use could be staggering for any diesel engine, especially those needing to meet EPA Tier 4 emission standards.

Blend Your Own Ethanol Pumps Available In Sioux Falls

Piping Ethanol Out of South Dakota